The Life and Death of a Canadian Black Community 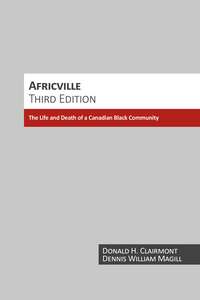 In the mid 1960s the city of Halifax decided to relocate the inhabitants of Africville—a black community that had been transformed by civil neglect, mismanagement, and poor planning into one of the worst city slums in Canadian history. Africville is a sociological account of the relocation that reveals how lack of resources and inadequate planning led to devastating consequences for Africville relocatees.

Africville is a work of painstaking scholarship that reveals in detail the social injustice that marked both the life and the death of the community. It became a classic work in Canadian sociology after its original publication in 1974. The third edition contains new material that enriches the original analysis, updates the account, and highlights the continuing importance of Africville to black consciousness in Nova Scotia.