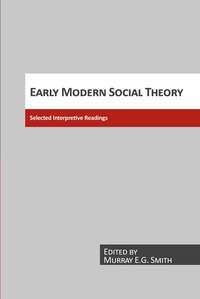 Early Modern Social Theory: Selected Interpretive Readings is a collection of essays that illuminates the course of development of modern social thought, from the Enlightenment to the 1920s. The essays focus on the most prominent social theorists, including Smith, Durkheim, Marx and Engels, and Weber. Each essay has been chosen to provide the main contributions of the theorist and the political and economic context in which he worked. The editor, a noted scholar in the field, has written clear, concise introductions to each section and provided a glossary of frequently used philosophical terms.

The collection includes two famous feminist critiques of the literature, by Rosalind Sydie and Lise Vogel, as well as papers by Tom Bottomorw on Max Weber, Anthony Giddens on the division of labour, and essays by Mandel and Trotsky on Marx.

Chapter 4: Industrialization and the Rise of Sociological Positivism
Alan Swingewood

Chapter 8: The Place of Marxism in History
Ernest Mandel

Chapter 11: Max Weber: The Disenchantment of the World
Randall Collins and Michael Makowsky

Chapter 15: Social Differentiation and the Division of Labour
Anthony Giddens