Social Movements in a Global Context 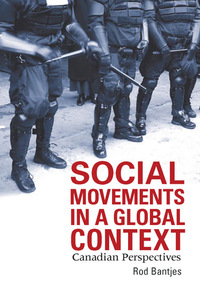 Social Movements in a Global Context focuses on interpreting the resurgence in popular protest for a growing audience of university students. Most of this new activity is either in response to or makes use of emerging global regimes — hence, the book's emphasis on the global context as well as on strategies for trans-local mobilization. Equally important is the fact that the book adopts a Canadian perspective and highlights, where possible, Canadian case studies.

The chapters are organized around an explanatory framework, such as class analysis, or a core analytical question. Some of the chapters deal with historical content, but all make links to the immediate present and attempt to engage students in ongoing debates and struggles. The author makes connections between movements and the state, focusing on the dynamic of co-optation/coercion. The author also pays attention to the spacial dimensions of movement formation and tactics, which are particularly relevant in the present era of globalization.

Chapter 1: Workers of the World, Unite!
Chapter 2: State and Co-operative Movements
Chapter 3: Movement Innovations in the 1960s: Resource Mobilization?
Chapter 4: Resistance to State Terror
Chapter 5: Culture and the Politics of Identity
Chapter 6: Bureaucratization and Anarchist Resistance
Chapter 7: Terrorism and the "War on Terror"
Chapter 8: Consumer-Citizen: The Market as a Social Movement Tool
Chapter 9: Discourse and the Power of Constitution: "Speaking for" the Environment
Chapter 10: Beyond Nation-State Sovereignty: Indigenous Peoples' Internationalism
Chapter 11: Coalition Politics
Chapter 12: In Search of Global "Public Space"